We knew when we started with the new engine it wouldn’t be a easy ride. The engine was gona be a om606 stroked to 3.4l with direct-injection. We spent the whole winter and spring sourcing parts for it meeting people like Vesa who planned the engine and found a crankshaft for it. We also talked a lot with Christer Örn who made custom pistons for the engine. When the first race trip to DHB in Danmark we realised that we wouldn’t get the direct-injected done in time.

Teemu and Ville quickly decided to make a new 606 with one of last years engines. We quickly put it together and got a really nice turbo for it. We brought it to the first test and we were amazed with how good the turbo worked. Then the problems started. Teemu noticed some weird sound on high rpm like a rev limiter. A couple more laps with adjustments and trying to figure out the problem in between and the first catastrophe happened. The new (best we’v ever had) turbo exhaust side exploded small bit’s an pieces even flew trough the bonnet. Luckily no one got hurt.

We were not entirely sure about what broke the turbo and we thought the axel might have had a manufacturing defect. We put in a new turbo, a really bad one, that we had raced with last year for a couple of races. New test and the same problem and one new as now we didn’t get boost. Only about 2 bar and we really need about 3.5 to get any kind of power. We decided to quickly get a new turbo and changed it but we still got the same problems.

Now we where really in trouble we only had about 20 hours before we had to leave to catch the ferry. During the night we rechecked the whole engine  and found nothing wrong. At this point it was 5am in the morning and we left the garage for a quick shower and a few minutes power nap.

We got back to the garage and Teemu had called Pekka Herlevi. Pekka suggested we should change the mechanical pump adjuster, he said it’s highly unlikely it’s broken but it might work. At this point we was i such a hurry that every minut counted. We quickly changed the adjuster and went for a burnout infront of the garage. It worked, sort of. We got a little bit higher boost and the rev limiter sound was gone. We quickly loaded the drifter in the bus and left full speed to catch the ferry. We was barely in time and got on the ferry as the last vehicle.

In Danmark we quickly realised we didn’t got the power needed we did a couple of practice laps with a lot of other troubles. To the qualifications we put on the slipperiest tires we got and Teemu somehow managed to get trough even though he said the car was underivable and  the rev limiter sound was back again. The race for us was over and we headed towards Mantorp where the next race would be. We had time to take a couple of days of so because of Teemus obsession with amusement parks we went to Legoland and a local water park. Some of the Mother’s at legoland gave us some strange looks 😀 We then went to Gothenburg and staid a night at Pluppen’s. While we where there we decided to go to Dieselmeken on the way to Mantorp. Göran Lindgren had kindly promised to take a look at our pump and try to get it sorted out.

At Dieselmeken Göran quickly figured out the mechanical adjuster we had changed was completely wrong adjusted, naturally because it came from a random pump we found in the garage but were to tired and in to much hurry to think about it (the story of this season).  Göran also found some other problems on the pump and we changed it completely to one Göran had ready. The pump was actually made for Oskar, big thanks for lending it to us!

We arrived in Mantorp at Thursday and started practice on Friday. Now everything was much better. We still was quite low on boost because of a the bad turbo but I think we would have got it working if we had got to adjust it a little more but again disaster struck. After about 10 practice laps Teemu came in to the pit with a popped water hose and a lot of oil in the engine compartment. We realised what was the problem and had an 15min breakdown when we went inside the bus an thought about what to do. We decided to lift the top of a check if our fears were true. And of course they were, the second cylinder piston had melted. Even though it was a long shot we were gona try to fix the engine before the qualifications on Saturday.

For the second time in a week we needed to pull a all-nighter this time without the comfort of our own garage.  We found a new engine for reasonable price and the seller agreed to bring it to the track. Meanwhile we disassembled the old engine and sourced parts from it. Around 1am we got the new engine. We decided to not bother to put in the strengthened rod from the old engine to save time. Half of us went to sleep for a couple hours and continued work when the other half got to sleep. There were some desperat solutions to get it working. To mention one, we welded the cam-chain to get it together. Huge thanks to everyone helping us getting it fixed! Somehow we got it going again and Teemu got out on a practice lap.

When we was gona adjust the pump a little we noticed that we had broke it during the night and i was leaking oil. Once again Dieselmeken came to the rescue and i think Göran and Oskar made som kind of a speed record when they changed the mechanical adjuster from the broken pump to the old one we had in Denmark and mounted it on the car again.

The next weekend we had a midsummer race in Kemora (our home track). It was a rainy weekend and while the track was wet everything was working fine but then in the qualifications the track started to dry out and once again we had way too little power. The original rods had started to give up and we had almost no compression left. The car was again underivable and Teemu got two zeros from the qualifications. After the finals there was gona bee a “entry” competition and Teemu and Simo Yli-Karro Fitted a full NOS bottle on the car. Ville called Teemu in lineup and told him to “Melt” the engine 😀 And Teemu tried his best but the crankshaft bearings broke before it melted. 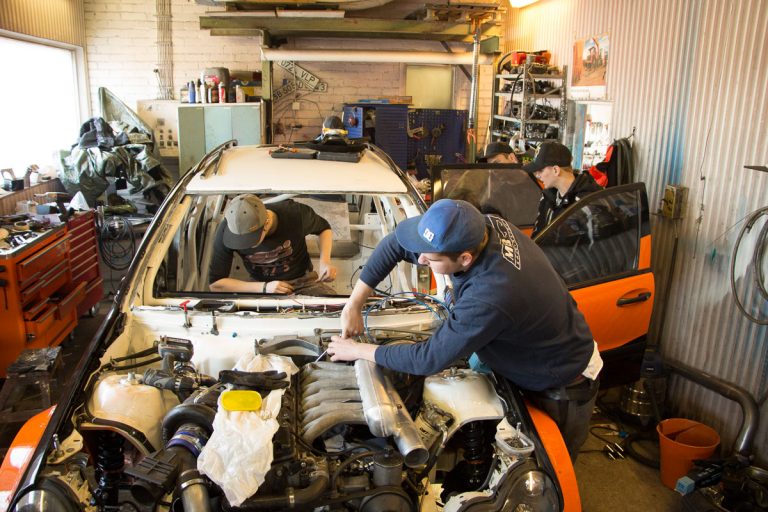 We were a bunch of people at the garage yesterday and by the end of the evening we got to replace theese to-do-lists to one short one. We have fitted some new safety equipment and a new shut of system that actually works for this season. Ville tought it would look nice with tinted windows. Teemu and Ville…

Finally the second part of the Road to Gatebild BSR edition. This is the first video we got to test out the new camera equipment, crane and a lot of stuff from Kuva Järvinen.

We tested the car more yesterday and also got it outside. We discovered our first problems and the guys are no fixing them so hopefully it will be done this weekend when we are gonna test drive it for real. The problems was a leaking exhaust seal and troubles with the wast gate we also got some…

Joulumyynti vielä päällä! And here you go, the video! Enjoy.