I was writing a final post about the last modifications to the new engine for this season but since we already broke it i decided to write this one first. So we already have been to two “driving” events this season, very early for us, Elmia in Jönköping Sweden and Seinäjoki in Finland. We had some problems in both races and after the practice in Seinäjoki the engine main bearings broke down.

The problems in Elmia very typical new engine problems. The double turbo system makes for some complex piping and valves that can be tricky to get right before you test it on track. First one of the valve sealings got to hot and melted and then we cracked a pressure hose. Unluckily the hose was in such a difficult place that we didn’t spot it in time to fix it before the finals in Elmia. The good news is that the program in the car gave it about 600hp worth of diesel and if you watched the videos you almost can’t see any black smoke. That means we are very close to 600hp with this setup. The bad news is that Teemu still thinks it’s quite hard to drive or in his words: “This car is undrivable, It’s unbelievably shit”. The simple fix would be to raise the rpm’s but that can lead to a lot of new problems and Jesse our main mechanic is very reluctant to do so. Also we would need to rise it to about 6000-7000rpm to make a big enough impact and that might simply not be possible with this diesel engine. We have some thoughts about how to make it more drivable and we’ll speak more about that later.

Then to the breaking down part of the story. So after a few runs in Seinäjoki we hear the well known and much feared idle sound from the engine. The sound was so bad we first thoughts was that we had a piston failure again.

When we opened it they however had survived, the crank bearings hadn’t. The whole main line for the bearings where screwed. Annoyingly we aren’t quit sure about the reason. The block probably was a little defect already when we built the engine. It could also been something with the bearings themselves. The thing we are certain of was that the oil pressures dropped to 2bar because of a faulty oil pump. Maybe all these together explains the fast and complete breakdown, all the bearings had broken when we opened it.

The fix then. The block would have been quite expensive to fix and we would have had to wait for it a week or two so Teemu went to Parkkila in Ylivieska and brought home two new blocks. Jesse have fixed and modified the oil pump to make sure we get enough pressure and we’ll go to Seinäjoki to get some expensive engine oil 🙂 Jesse is also working hard to make the valves work better with all the heat and pressure. All and all we think we are just some fine tuning away from having a durable engine. Then we’ll just need to find more power and make it easier to drive. You have to remember this is a race car it’s exposed to extreme conditions repeatedly for very long times.

Here’s a sneek peek of what the suspension, wheel hub and the control arm will look like on the w202.

Now the engine has been fitted and now it’s time to start measuring and mounting the intake pipes and valves for the compressor. 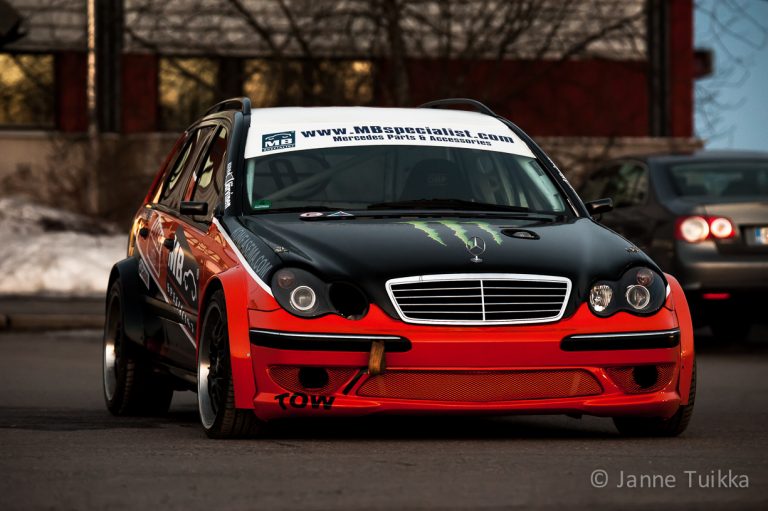 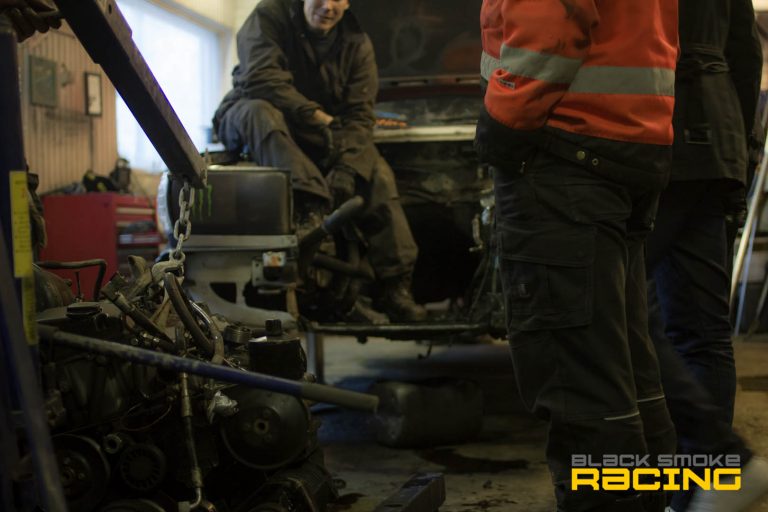 We had a great garage day on saturday and got a lot done. As you may have heard we will “Loan” the engine and gearbox from the w123 to the new w203 to save time. The w123 won’t be needed in the spring months so we will have more time to fix a new engine…