As the headline says the season has been opened, if you’re reading this you’ve probably already checked our facebook updates and know how it went. The problems started in the morning at the car inspection when the emergency stop didn’t work or in othe words the cable was stuck. We immediately started fixing this and by noon we had it fixed and ready.

At this point we noticed that we had managed to pull out some wires from the gearbox controller in the hustle. (which for some reason had no cover installed?!?!) The controller is pretty complex and Ville Saari wasn’t on location so we called him and gently explained what had happened and with Ville on the phone, Joni and Magnus managed to fix the problem.

Joni and Magnus now knows a lot about the gearbox’ software and hardware, so in the future we’ll be able to do something on ourselves if thing go terribly wrong.

By this time the clock was something like 14:30 and Teemu hadn’t got a single practice run yet. Teemu fired up the car and went for the burnout ring, simply to test the gearbox. The gearbox worked like a charm 1-2-3-4-5NOS-KABOOM. The driveshaft was broken. The car seems to have a lot more power with the new turbocharger.

We started looking for a driveshaft, AND FOUND ONE, in the town nearby, HUGE thanks to the kind souls who fixed the shaft! However, it’s quite hard to make a driveshaft without proper tools. With no practicing, Teemu entered both the pro- and the pro street series to get some practice, he qualified second in the pro series, the track was still wet and without proper torque the foul driveshaft lasted. While practicing for the pro series the driveshaft broke in the pro street series finals.

The racing was over before Teemu could start top 16 in the pro series.

We are now making a sturdier driveshaft which WILL last. Updates on that story atleast on facebook and instagram soon. We are VERY happy with the car and with two weeks to the next event we’ll have more than enough time to fix it. 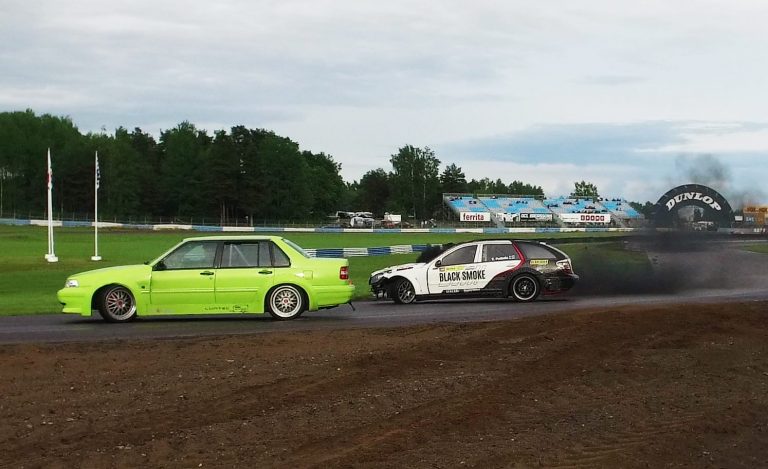 Hi there! It has been quite silent after the promised test run two weeks ago. The reason is that the engine broke down after just a few runs. At first we had no idea why this happened even if someone mentioned the reason already on the scene of tragedy as a possible fault. We didn’t want to tell anyone before we knew…

Today was a great day at the garage, when 10 people work on the same car, a lot gets done. We also had visit from Sweden, here Niko is sealing the firewall. If you’re wondering about the aluminium parts, SSp stands for Sundfors Special parts. Sebastian Sundfors, SSP,has made a lot of parts to this car….

Venetsia drift, an event organized by Black Smoke Racing, Team Driftgarage and Rengasmarket drift team will be taking place in kokkola 31.8. If you live near enough, please join us for this fun competition, about 10 drivers attending. The price is 5€. Chevk our FB for more info and some teasers!

It’s been a busy winter and we haven’t really updated you enough. Heres a quick recap of the last week and the first burnout video with the new engine 🙂 You will get more posts about the specifics of the engine as Jesse have the time to write em.

Well… It was a really nice day at the Gothenburg city ring with the Monster crew, but as you can see in the pictures below the car got a small scratch again. Are we learning from our mistakes? …Nope but we are getting faster to fix em. When we started to repair the car we…