The cooling system is made a lot like the one on the w123 with a big radiator in the boot (8cm Griffin), an electric transfer pump (greg davis), and some big hoses which deliver the coolant to the engine bay.

The pump and the hoses are yet to be installed, this will happen after we’ve painted the car inside which will happen when the rollcage has been made.

The radiator gets air from a opening in the bottom and when the air has passed through the radiator it moves out through the tailgate, check the images.

If the car should need help with air flow two giant electric fans are installed. Hope the battery is powerful enough for these to babies (;

Yesterday we also filmed some interviews with Teemu where he explains a little about the season of 2012, what kind of season we had and so on. Some kind of “best of 2012” is to be expected soon, stay tuned.

Long time since the last post once again. We had a really busy end to the season first we arranged our own race Venetsia Drifting with Rengasmarket Drift Team here in Kokkola. That took up a lot of our time. After Venetsia drifting we ended our season at Gatebil Mantorp. We had plans to go… 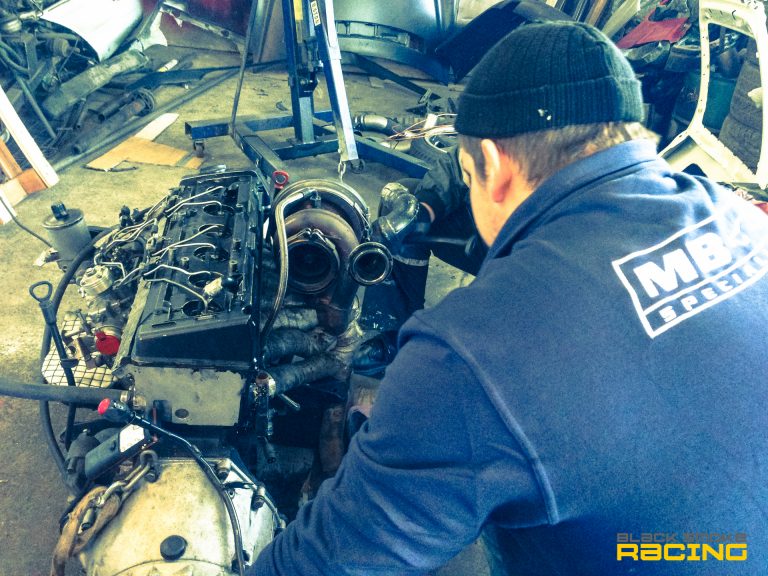 Engine is mounted fitted and piping has started. Enjoy some pictures! We replaced the oil pump and changed the gear for it to get rid of the cavitation. The wheel did not fit properly in the oil pan so we remade it a little, check out the pics (; Oil coolers are fitted and tubing…

Really look forward to be there. Be there and watch out the merc for the last time in action!

Check out tuning parts and more in our shop! Now we have new street performance injectors and 606 and 648 pistons back in stock!

Autopalvelu Parkkila Oy is specialised in Mercedes benz, they sell spare parts, used cars and also does maintenance. They provided us with the w203.