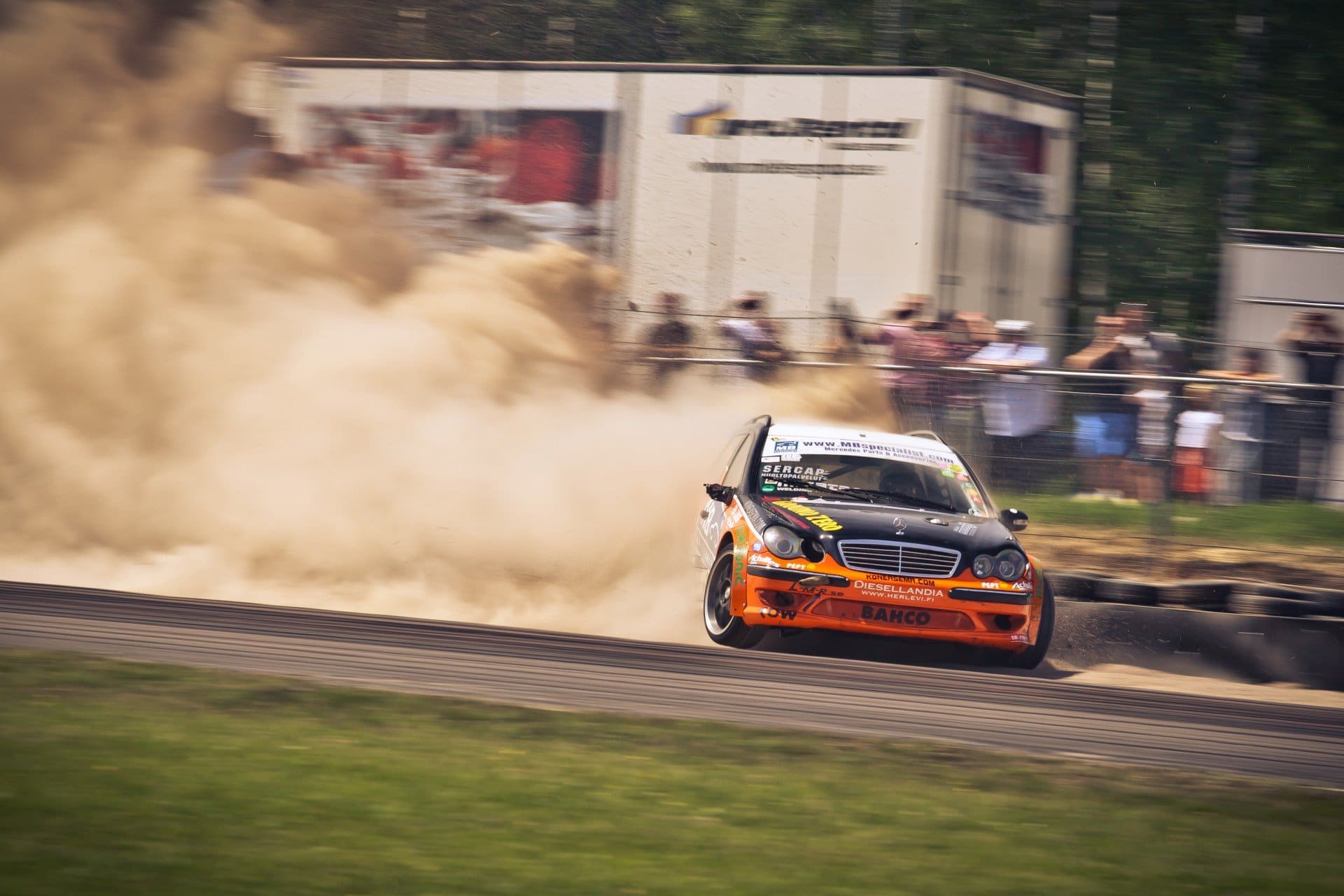 Read Part 1 HERE, if you have not read it yet.

After the midsummer event at Kemora, Finland we had two weeks to make the car ready for Gatebil, the main event in Rudskogen. In just a few days we got the cummins injectors for the DI engine, which we were told would fit, however we immediately realised they would not fit as the angle was not correct. The disappointment was huge, after a lot of phone calls and messaging we realised we would neighter find the right injectors nor have the time to get them modified to fit our engine.

Another 606 was the “new” plan for Gatebil. We had already started making the all new exhaust manifold and compound turbo system for the car so we figured why not finish it and start testing that part of the project too. When the “new” 606 was mounted, the compound turbo system had been fitted and everything was double checked we still had a few days left before Gatebil, unbelievable. The car started and the engine ran fine, it was nice and quiet with the two big rotating silencers and the short exhaust which did not touch the chassis anymore.

At this point, 9. July we were already quite ready for a new disaster and thought we should make it happen at home and not in Norway on the track. We headed to Kokkolan Autohuolto to get some dyno tests done, to be sure it worked. We ended up making a lot of pulls in the dyno as we were adjusting the wastegate (yes, we only used one of them at this point.), maybe 12-16 pulls. Everything worked fine and we even had the power to drive some big right turns at Rudskogen. Happiness was in the air as it was the closest we’d been to be sure everything works as it should on the car.

When Teemu got out on the track on Friday he did not even get a whole lap before the coolant hose popped at the water pump, and he came back in. The car had worked perfectly in the dyno but was now seemingly not ok. We could not believe there was anything wrong with the engine so we started to check the water pump, nothing was wrong with it so we decided to try again after connecting the hose. This happened a few times and we thought that we should check the head gasket. The gasket was broken in a way we had not seen before, it was leaking between the steel layers even though no apparent damage was visible. As we could not find an brand new one, we put one together of two old ones. At this point it was too late to drive on the track.

On saturday Teemu went out on the track, and again, did not even drive a whole lap before the hose popped again. This time also some bonus sounds from the crank shaft bearing was present. The weekend was over.

Teemu borrowed our neighbours car to drive breisladden (600hp Supra! Big thanks to Marcus wigstrand for lending your car!).

When we got home from Norway the next race was Venetsia Drifting. This event is organised by Black Smoke Racing, KokUa (local motorsport association) and Rengasmarket Kokkola Drift Team. The event is arranged during the last weekend in August, during Kokkolan Venetsialaiset which is the event draws most visitors to Kokkola every year. You could say that the theme is something like “the last weekend of summer”.

Before Venetsia Drifting, we had a 7 week period with no races. We decided to enjoy summer a little (preparing the event and working our asses off) during the first few weeks, the car was not even unloaded until we had three weeks to Venetsia Drift.

Now we had the time to get the DI engine running, we received the right injectors and the mechanical pump, Dieselmeken 8mm “superstroker” pump. The engine was first started with no problems on the 21. August.

On august 27. it was already fitted in the car, again, time for dyno. In the dyno both of the turbos broke HX60 & HX40 super, with only three days left to Venetia drifting, we converted the engine back to single turbo.

Looking at the event from the organisers point of view it was quite successful. Next year we hope to make it even better! Please have a look at the video from venetsia drift below.

Two weeks later we attended Hötsi in Oulu with Audioimport (big car-hifi fair in Oulu). IT WAS VERY LOUD! Thanks to everyone who visited us there!

As Gatebil arrange the late Mantorp event for the first time this year, we felt it would be really nice to attend that too. The event was going off 26-28 September. Everyone was understandably quite fed up with this season and no motivation was to be found. The idea of digging the w123 out of the ditch and bringing it to Mantorp was the only way we could get everyone even a little excited.

We built a quite normal om606 with Verdi rods and a 7mm Herlevi pump. This should have been fail-safe, we wanted to get a A LOT of track time at Mantorp.

On the way to Mantorp we almost froze to death.

For some reason, the car had approximately 350hp, unbelievable. As you can see on the video below, with this amount of power you can’t do anything at Mantorp.

We had a lot of fun at the season finale and we would like to thank all of you for staying positive and for supporting us by buying our merchandise. We will thank you soon with starting the garage episodes again. Stay tuned for Episode nr. 10 in the Daily Driver series.

This was the second part of our 2014 recap. Special thanks to all of our sponsors for this season, without you, this would not have been possible.

Please don’t hesitate to comment if you have any questions!