We left Finland on the 29th of may, so now it’s two weeks on the road, we’ve done DHB, BDC round 2 and now we’re sitting in gothenburg waiting for Gatebil, Mantorp.

At DHB Martin Poorhamidi had set us up with the most perfect pit, right next to the track and right by the spectator area. The training went well and after 5-7 runs Teemu thought he had the track under control.

During the qualifications the gearbox started to make noise, nothing we could do anything about but check oil and temperatures, as nothing was off Teemu continued to the top32. The whole top32 was fast and Teemu battled his way through top16, top8 and in the semifinals through a tight battle with Martin Poorhamidi. The finals against Karsten Mikkelsen was epic and Teemu used nitrous on about 80% of the fast technical track, according to Teemu, the car had nothing more to give. In other words every single horsepower available was used.

Teemu won the final and the season “started” perfectly.

After DHB we went to MB specialist in Gørløse to fix the gearbox and visit our main partner. The oilpump, some bearings and the friction disks were changed on the gearbox. The sound was not there anymore but now it would not shift properly. We called Ville and the answer was definite, air in the oil. The car just had to run and circulate oil to get the air out. The problem was fixed in Gørløse as the gearbox started to shift properly.

After this we left for Pembrey, Wales and BDC round 2…

Special thanks to MBspecialist for the hospitality!

We organized an epic event in Kokkola together with Rengasmarket drift team! Everything went smooth and Teemu happened to win the competition too! We also got an award for event of the year

The first race of the season was yesterday at Kemora. The whole team especially Teemu was really excited to put the new engine to a test. Unfortunately the problems started already on Thursday evening.   Picture by Janne Tuikka 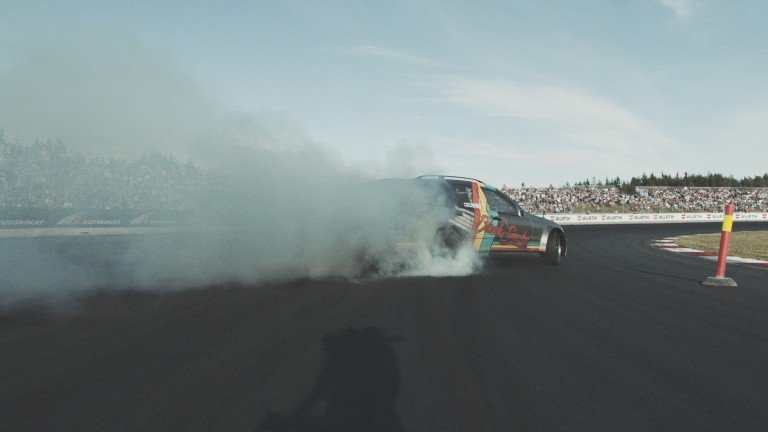 This weekend we participated in the car show AutoSaloon, the event was in Turku. We also revealed the new livery for 2015. Read more about the 2015 setup and testing here